Are We Smarter Than Our Fifth Grader? 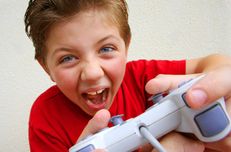 Wait…are we smarter than our first grader?

A good friend once told me they decided to have a children so they could help him set up his computer. That’s not far from the truth.

The world has definitely changed and, as an optimist, I believe overwhelmingly for the better, but is sure has laid the groundwork for some pretty cocky kids!

At 7 years old my son and I were playing some video game where they are snowboarding down a mountain collecting coins, and powers, and all sorts of wacky stuff; some by simply smashing into snowmen or jumping over canyons. It took me several weeks, but one day I actually was almost going to win, which was a feat against my overconfident second grader. I was just inches from finally beating that over confident little rat when I think I heard him smirk and then a huge bottle cap or coin came smashing down on my head and my son raced past me to cross the finish line.

He apologized and said he just couldn’t do it. He tried to let me win, but he couldn’t.

He was just playing with me, like a cat would tease a mouse just before gnawing off his head.

When I was a kid the most difficult part of having free time was trying to drum up a few neighborhood kids for our daily whiffle ball game.  Kids today get involved in multi-tiered, never ending complex video games playing with other kids around the world they’ll never even meet. When I ask about the game he just looks at me sympathetically and just says, ‘Do you really want me to try and explain this?”. Of course I didn’t, I was just being nice.

Here’s our dilemma- we still have to keep up the guise of being smarter than they are.

It’s tough because they are like creatures from a more advanced planet using little human bodies to grow so they can take over the world.  They recognize that they still need us to drive them around and procure food, but they know inside they are advanced beings. Outwardly, it’s the cat and mouse thing again.

He’s a teenager now, so now was the time to make a top 10 list of things I know that he doesn’t. I had to. I have my own self-esteem to think about, too, you know.

And my favorite little nugget of knowledge I want to propose in the form of a parental experiment that I hope you try. Consider it a gift from me to you.

When you have your kids and their friends in one room anxiously awaiting their favorite T.V. show, about 2 minutes before it starts make sure you hide the remote and watch the panic ensue.

Yes, I know how to change the channel without the clicker! Well, I used to.