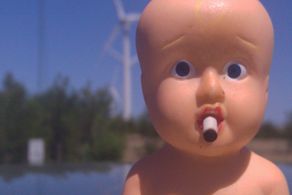 I love sharing things that actually matter. In 1970 I lost my mother to cancer caused from smoking. When I became a musician and started writing songs for kids I wrote ‘I Will Never Smoke”, which was my way of reaching kids with that important message.  Maybe it was a lemonade from lemons thing, I don’t know. Maybe it was just life experience therapy. No matter.

Here’s a brilliant anti-smoking ad I came across today, maybe the most watched in history http://www.upworthy.com/i-can-see-why-this-has-been-called-the-best-anti-smoking-ad-ever?g=2

I never judge adults who smoke because I totally get how addictive it is. Quitting is a tough battle, but my focus is on our kids.  Can’t we all agree that it’s an unhealthy destructive habit with no happy ending and rally around spreading this message? (When I say kids I am really talking about the middle and high school kids that for some reason make the conscious decision to start in the first place).

Our music plants seeds in younger children, k-6, but most kids start as teens. I should know, Even after losing mom at 12 I started smoking at 15. I smoked for a few years (idiot, I know) and even though I quit by 18, I STILL have the occasional dream that I am smoking and it’s been almost 10 years now… ok, wait, more like 38!). That’s how powerful those thousands of chemicals are that are in each cigarette.

Oh, and kudos to CVS for finally removing cigarettes from their store. It always seemed strange to me that in the front of the store were cigarettes and in the back was the pharmacy selling medication that in many cases were treating the ill effects of smoking.

So here’s my question. As parents and teachers you already know that there is that group of kids that we never have to worry about, they are on a seemingly predetermined path to a successful life. There is also that group that no matter what we do seems they will go the other way.  But the group in the middle, the majority of kids that although they are awesome amazing kids, they could go either way. How do we get through to them and nudge them over to a healthy lifestyle? Ideas?

I know when I started it was because I felt grown up (ha!) and maybe a little rebellious. I remember, though, hating it for first pack or so. Why on earth did I labor through the pain of smoking and do it until it became a (horrible) habit? Question of the year, I know. I did think it made me look cool for whatever reason. Kids smoking today might have the same reasons but we need to get through to them that pretty much everyone who sees them smoking sees someone NOT cool. Someone who embarking down a health-wise destructive road.

I have an idea for an ad campaign. Simple, really. Just have really good looking teens acting disgusted and refusing to kiss the person smoking.  That should do it.

I put together a little video slide show for kids to my song, “I Will Never Smoke”.  Maybe this is something you can share.

I Will Never Smoke Slide show